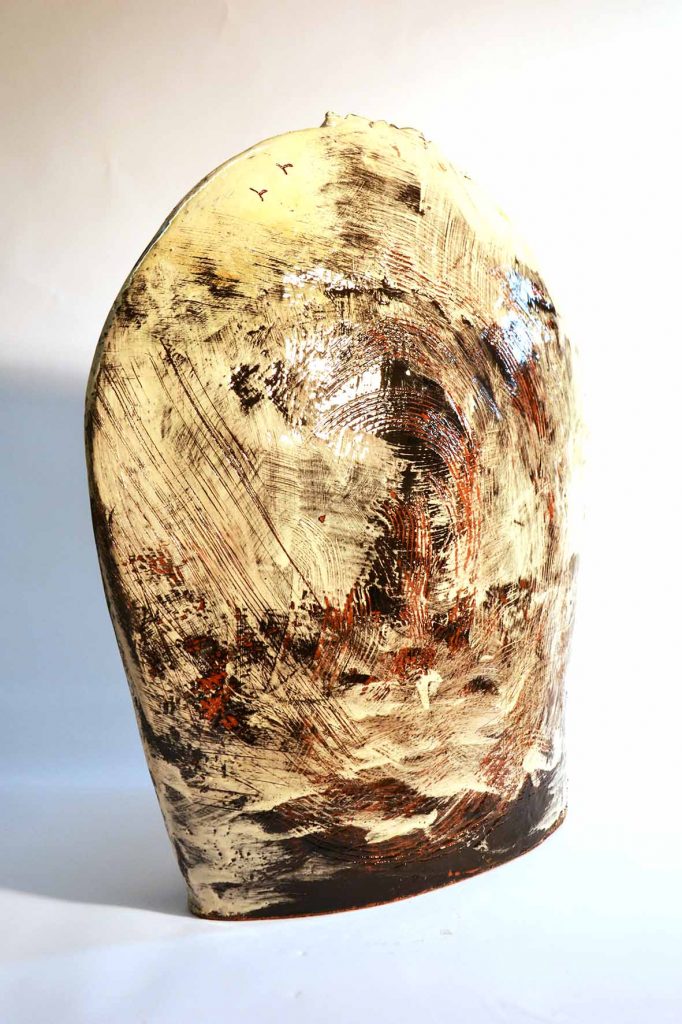 From memories of childhood, I recall a passion for making things which gave pleasure to both myself and others. These memories span a wide range of activities to which children born in the 50’s can all relate. We didn’t have a TV until I was about ten years old, just an old wind up gramophone, a pile of Joseph Locke and Glen Miller78’s, which I played down in the cellar which was the workshop. It was my favorite part of the house. You could just go down there and make as much mess as you liked. I was born in 1950 into a family of grocer shop managers and a pharmacy technician which meant that things didn’t come that easily. It was a time when we would instinctively apply our creative skills to the task of making things for ourselves and others, in order to enhance the quality of life. To me, this proved to be an invaluable learning curve. This creative passion has long since continued to fuel the need to fulfill my personal challenges, which to this day, often spiral into moments of often immense satisfaction through to waves of disappointment and sheer frustration.
I trained as a teacher at Bangor Normal College (1971-74). I was fortunate to have been an art student of the Welsh artist, Selwyn Jones. His encouragement channelled our creative skills into exploring diverse and often unexpected avenues whatever the outcome. I recall walking to my art lectures daily, often having an inquisitive sneaky peep into the pottery studio on the way. I had never previously considered ceramics as a personal creative outlet. One afternoon, I ventured inside merely to satisfy my inquisitive nature. As it happened, a next door neighbour of mine, Paul Lloyd who was also an art student, was in the studio working on a superb large sculptural ceramic piece. Everything about it was fascinating. I was completely taken aback by the whole ceramic environment which I had never previously encountered or even been aware of. The musty earthy smells, the bizarre equipment, the dusty greyness, and an ageing and somewhat eccentric pottery lecturer, Miss Mary Richmond intrigued me immensely and I remember the experience to this day. Eventually, Selwyn Jones became aware of my fascination with this avenue and suggested to my taking a double degree in Art and ceramics.
Those three years at the Bangor Normal Art Department were among the most memorable times which I can recall.
Mary Richmond was a totally dedicated enthusiast of the founder of the studio pottery movement in Britain, Bernard Leach. His book, ‘A Studio Potter’ was her Bible and she was familiar with it from cover to cover. As our final year commenced, she introduced the then bizarre concept of Raku Pottery. She drove Paul and I to various pottery materials outlets in Stoke, and allowed us to order whatever materials we thought we could make good use of. This in itself was another fabulous first experience, the greyness of the Potteries and the then seeming vastness of the retailers sites. Soon after that, she introduced us to Caernarvon clay dust which she collected from the recently closed Caernarvon Brickworks.

We mixed this into a sludge then into a workable clay after numerous painstaking sessions of pugging and wedging. Everything was now set up. We made several pots in preparation for our finals exhibition using this highly grogged, very grey clay, which had a texture which bore no resemblance to anything we had previously experienced. We slowly bisque fired them and they emerged from the electric kiln bearing the most beautiful brick red colour imaginable. It almost felt wrong to cover them up in glaze. The glaze! We mixed up a bucketful. It had a high lead content and matured at around 850degC. No glaze tests, there just wasn’t the time. We were advised about the properties of oxides and gum Arabic, and the health and safety regulations hadn’t been inverted. Maybe that was just as well. We hadn’t realised that the adrenalin rush from the experiences which were soon to follow, were a potential health hazard in themselves.

I can remember placing the raw glazed pots carefully in the ancient front loading kiln in such a way that they would be accessible with tongs. The door was closed, the pyrometer was set to 850deg.C, and the kiln was switched on. I can remember the nerves of excitement getting to me. All of the hard work and preparation was now in the hands of the kiln and the elements. The sensation of not being in full control was also somewhat unnerving. The utensils were all set out with almost military precision. The tongs, gauntlets, metal bin with lid, sawdust, facemasks, a metal container of water and a prayer book lay opened at ‘The Gospel according to Saint Bernard’..
The pyrometer reached 850C and Gauntlets and masks were donned. We opened the kiln door very slightly. I had never previously experienced such intense heat being so close. The glaze on the pots had melted to a brilliantly shiny liquid orange surface. The first glimpse was stunning. We decided to go for it. One opened the door whilst the other pulled out the pot which was hastily put into the sawdust. The smoke was very dense and it started to fill the pottery studio which was indoors and not well ventilated. We continued to quickly remove all of the pots and took the bins outside. Fresh air is so much taken for granted. Once outside we removed the bin lids after about fifteen minutes of reduction. The sawdust immediately reignited, that was quite a scary moment. As the flames calmed, the pots were one by one removed with the tongs and put into cold water in order to freeze the reduction process. The hissing and spitting of the pots in the bubbling water was quite an amazing sight. As the pots were covered in carbon, it was virtually impossible to tell what lay beneath it. At this point all of our hopes were in the laps of the gods. We scrubbed and polished the first pot. Slowly the design came into view followed by the most amazing copper and silver lustres, along with subtle pink hues. Surprise followed surprise and the happiness was awesome.

From that day on, I was hooked and my ceramic avenue was chosen. Paul is now a ceramist in N. Wales and has supported and helped me with the glazing of pots and the building and firing of my kilns. We have become close ceramic colleagues and I have enjoyed assisting Paul in the process of fitting his wood fired kiln which he recently built. Mary Richmond’s retirement coincided with the completion of my course and on her final day, she gave to me what is now one of my most cherished possessions, her personal copy of ‘A Potter’s Book’, by Bernard Leach. What an honour. 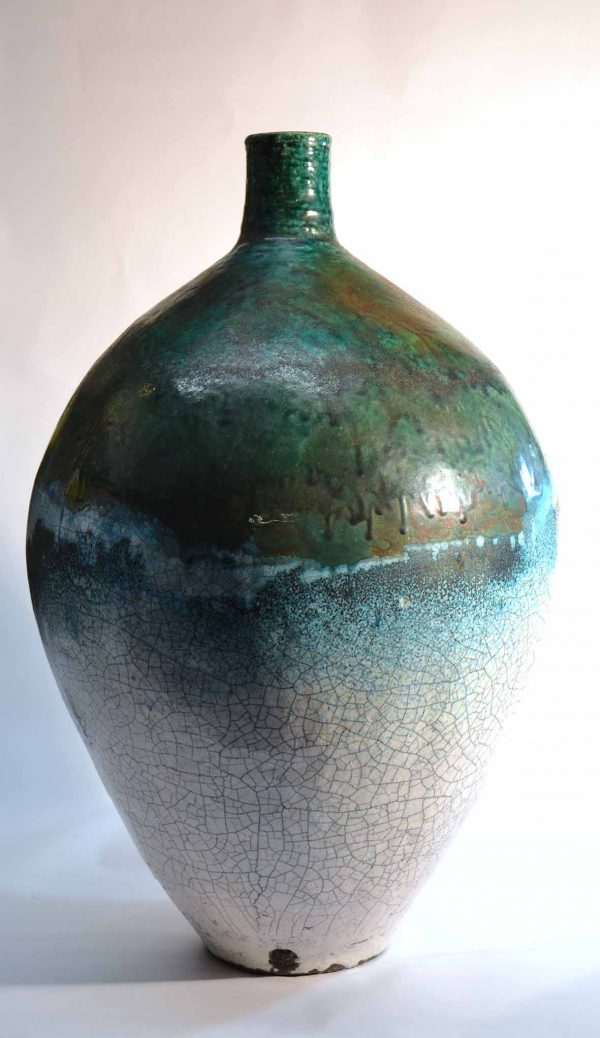 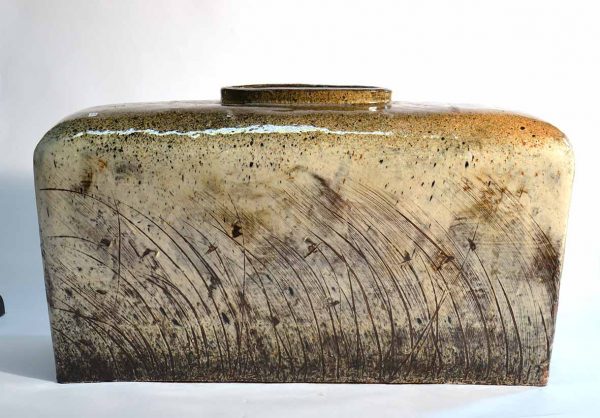 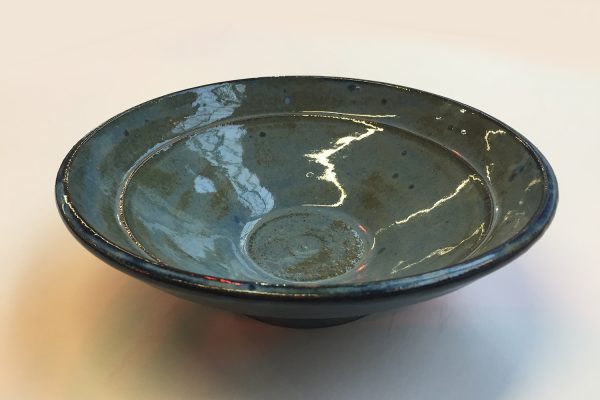 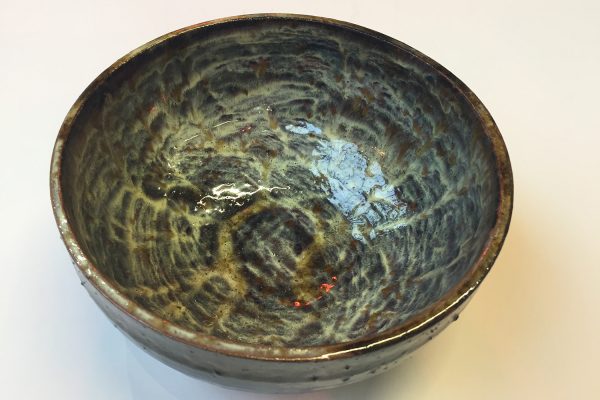 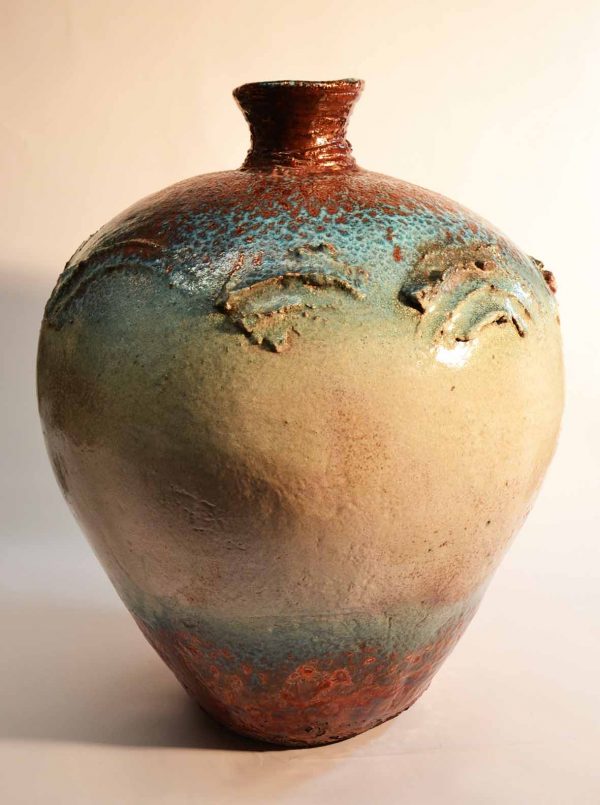 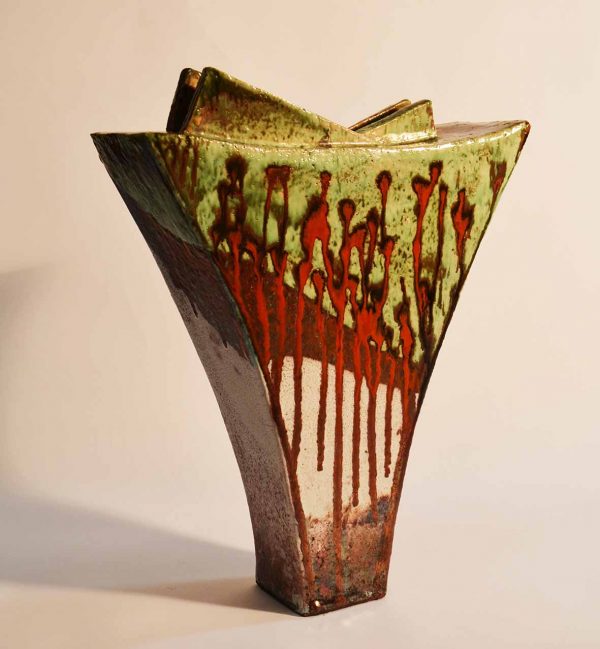 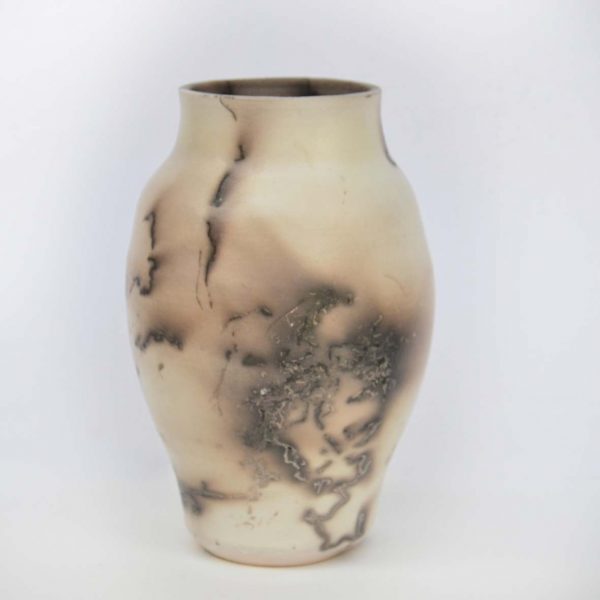 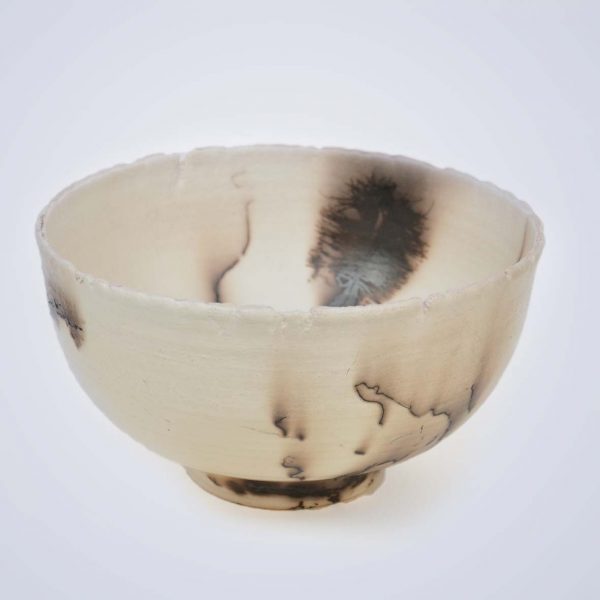