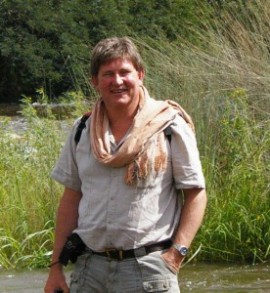 Simon was born in Tanzania, East Africa, where he spent his early childhood living on the slopes of the world’s highest free-standing volcano, Mt Kilimanjaro. At 19,340 feet it is also Africa’s highest mountain. At the age of seven, his family moved to Arusha, Tanzania’s then new administrative capital and centre of tourism. Here he was to have access to some of Africa’s finest game reserves. Now 35 years on, his images adorn the walls of the lodges in those same reserves.

For those who have been fortunate to visit this Eden of Africa, the experience enters deep into their soul and remains in their heart forever. Simon was educated in Kenya and then England where he was to eventually settle in 1979. In 2000 he moved to the county of Shropshire, where he began to rekindle his deep rooted memories of Africa by painting these beautiful images in this extraordinary medium. By using Tea and dry Ochre, Simon has managed to capture the colour, mood and shimmering beauty associated with this ancient but delicate land. It would appear that his beloved Africa has firmly etched itself into his soul. 2012 has shown a recent development in Simon’s artistic ability by introducing Chalk and Charcoal in the form of animal specimen sketches. The Original sketches have become most sought after with limited edition prints now available from his award winning website.